Going through some old diaries I came across what I’d written about a retreat I went to in Tapovan in the south of France in the year 2000. Doing Buddhist retreats is the thing I’ve done in my life that has had the most profound affect on me. I haven’t done one for a while, and I struggle to keep up with any sort of meditation routine whatsoever. But nevertheless once you’ve started off down this path you can never return. You may not make any more progress – but you can’t undo what you’ve already done. It’s not that you are a better person but the experience of the practice, and what the process revealed to you, stays with you. You are always aware that the path is there ahead of you – even if you are too lazy or stubborn to return to it.  Like eating a Porcupine, once you’ve started…(Tantric saying!)

The Tapovan retreat was the longest one I’ve done. It lasted for a week in a temporary camp on a remote ridge in the French Pyrenees in July 2000. Though from their website the overall Tapovan operation looks more sophisticated than it was then.

It sound’s idyllic and it was. But you forget how busy nature is in August in the South of France (Ciccadas like car alarms!). And more importantly you come to it with your own mind and your own expectations and you sit there with them in silence for 45 minutes and then walk…Slowly…  Spacewalk slowly… up and down the same track for 45 minutes at a time. Aiming to be in the moment, nothing but the moment, breathe it in and breathe it out, quietening the chattering monkeys of the mind. A great emptying out. Opening you up. Allowing yourself to become more receptive to the Buddhist teachings that come once a day,  and sometimes in fragments in the one-to-one sessions with the teacher, or during the meditation sessions.

Such a simple and admirable thing to sit there in silence and to be in the moment. What could be simpler? To let the thoughts come and go, like animals at a forest watering hole. Like waves on the surface of the ocean. Like guests at a hotel. Simple. Like banging your head against a brick wall is simple!

Are you trying too hard to be in the moment? Or are you just coasting it? Is it just you whose back aches, who is falling asleep, has trapped wind and who, with every cell of your body, is willing the bell to ring for the end of the session? There’s no simple answers to those questions. When you think you are right, you are wrong. When you think you are wrong you are right. If you ‘bliss out’ – so enraptured with the thrilling mystery of the moment, a silly big smile on your face, like you’ve arrived where you should always have been –  well then your ‘practice is in very bad shape’. Back to the meditation with you, back to the practice and the slow walking.

Nine-headed River Dragon documents the death of Peter Matthiessen’s wife and his journey into  the practice and history of Californian and Japanese Zen. His most famous book, The Snow Leopard, is part of this longer narrative, and if the Snow Leopard left you wanting more, you might want to read this.

Zen Mind, Beginner’s Mind by Shunrya Suzuki is a series of pithy, irreverent but insightful talks on Zen meditation and practice. 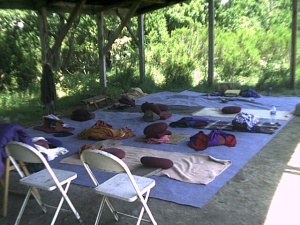 – why did I come here? why am I doing this hard thing? why didn’t I go on a proper holiday

– terror of groups of strangers

– the profound simplicity of the moment

– emotions come and go like the weather. They are not us.

– sick of being a Dharma slave

– we are asked to do small things with great love

– every day melts into every other like the constantly shifting clouds

– expansion and spaciousness in the face of situations that inspire contraction

– an intention to pay attention

– a fearless spirit of inquiry

– excited and not wanting to miss a moment

– commitment to non-harming is more important than meditation

– do not underestimate the power of this life

– when the wind blows through the forest you want to stay here forever. Dark ridge, clouds smudging the sky, stars. Beautiful night

– at the end petals scattered over each other

– looking someone full in the face and smiling

– the joy of conversation after not conversing for a week 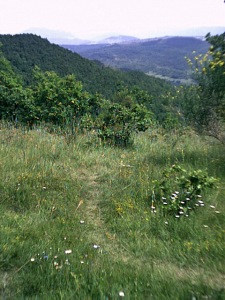 I only went to Tapovan once and that’s the first and last time I have done a retreat for a week – it was heavy! I go by what the Teacher at Tapovan said – whatever the length of a retreat you go through the same process of settling in and accepting you are there, followed by a period of being fully there, and then preparing for leaving. You can go through the same thing over a weekend or a three day retreat.

The place I’ve been to most is Gaia House in Devon.

Of which more later…