What better honour can there be than being immortalised in a traditional London Boozer?

May not be the coolest photograph mind you – but there’s a plaque with photos to mark the fact that the George IV pub in Portugal Street (near Aldwych) now displays above its bar the nameplate from locomotive 86 421 (as was). The photos are from the original naming ceremony at London Euston station on 3rd October 1985. I’m on the photo because it was my idea so the LSE invited me to the naming.

I sometimes thought that when the loco was withdrawn that the University should acquire the nameplates.

But it was a nice surprise when the LSE got in touch to say that they had acquired the nameplate and wanted to invite me to the ceremony to mark the installation of the nameplate at the George IV pub (which they now own) on 13th Feb 2008.

What’s good about universities as they one of the few entities that still retain the corporate memory to do these events so well. And what’s good about the George IV is that since the University owns it it’s highly unlikely to be subject to crass refurbs and will remain a traditional boozer – complete with the nameplate above the bar. It’s not often in life you get these satisfying full circles to something that was started off twenty years ago… 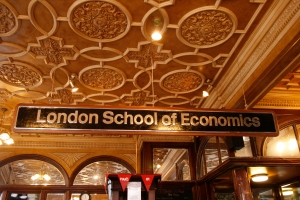 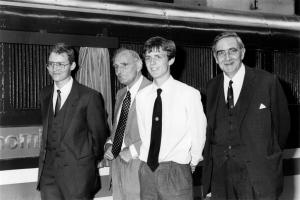 Meanwhile the forty two year old locomotive is still slogging round the country on container trains.