Friesland, and neighbouring Groningen, are uncelebrated rural provinces in the North of the Netherlands. They are also home to some of the most interesting and provocative ideas about what a humane and progressive transport policy might look like.

In November 2002 I spent a week in this big sky country doing some research for a Countryside Agency report on what lessons might be learned for the UK. My section of the report – which covered Friesland – can be downloaded here.

The city of Groningen has some of the highest cycle use anywhere in the World. It’s cycle city number one – and that’s not just in the city centre. I hired a bike and rolled on out from the centre, at random, to see how far the dominance of the bicycle radiated outwards. I kept going to the edge of town and beyond and it was bicycle priority and bicycles all the way. You get used to non-stop rolling and drifting along – not stopping except at the odd hard red signal. Negotiating your way along but supported by guiding signs and lines till I’d rolled right out to the city limits and beyond, along the dykes into a big red winter sunset.

I felt moved that a city could do this. Organise itself in such a civilised way. The car secondary, tamed, servile. And none of the elitism of British cyclists and bicycles – no mountain bikes or racers. Everyone on the same standard practical Dutch bike – integral locks, mudgards, lights, chainguard and rack. Everything the urban cyclist needs and no more. Utterly democratic – all races, ages, genders – all rolling along serenely .

The neighbouring province of Friesland was home to traffic engineer Hans Monderman (who sadly died earlier this year). Hans took the Netherland’s enviable reputation on road safety, traffic calming and cycling and used it as a jumping off point to take Dutch road engineering in some new, strange and wonderful directions.

One of his big ideas was ensuring that the road ‘tells the right story’ by being in harmony with its purpose, and its built and natural environment.

For example older, tree-lined minor roads might lose all their signage and markings because the road – just as it is – fits in with both the landscape and its purpose (light rural traffic). The old rural road becomes a thing of beauty in itself. Your eyes are so used to seeing roads with their standard authoritarian lines and signs that it takes a little while to really see and appreciate the road without it. But shorn of its diminishing clutter the country road regains some of its magic again – winding its way into the promise of the distance.

Over time the schemes became more ambitious. In the Village of Nijega, on a through road, a short stretch of bypass had been used to cut out a curve at the eastern end of the village where the old road passed a former toll booth, a church and a bar. This short stretch of fast route gave drivers the wrong message: that it was acceptable to drive through the village. Following extensive consultation and discussion with the villagers the bypass was taken out and the old route reinstated, ast the church, toll booth and bar. This gave drivers the right visual signals about the nature of the road they are travelling on.

This brings his second big idea into play – that of socialising and humanising traffic management through the counter-intuitive method of removing signs, lines and traffic signals. Road users respond to the lack of formal management of junctions by slowing down as who is going to charge at speed through a junction which has no formal controls? And then having slowed, drivers, cyclists and pedestrians negotiate their way through the junction with waves, nods, eye contact and common sense. And it works! His biggest and bravest scheme was a crossroads in Drachten which has a throughput of 17,000 vehicles a day and 2 to 3,000 cyclists.

Hans Monderman took the time to spend the best part of the day with me showing me some of these schemes, and explaining them to me. But I was one of a stream of international visitors who he was happy to show his work to. He also said to me something along the lines of that trying to change everything, to change the world, was impossible. The best use of your time was to make a significant difference in one area which would reverberate more widely. That stuck in my mind. I think he was probably right. I think he certainly saw it as important part of his work that he did take the time to show and explain it to others so that people in other countries could try it too.

Since 2002 these ideas have been taken up. Though sometimes the political right and the petrolhead lobby have taken what they have half heard about Monderman’s work, and twisted it to serve their opposition to anything that restricts the right to drive where and wherever they like.

Hans Monderman was a good man – and a brave man. Imagine being the Traffic Engineer who promoted a scheme to take out traffic lights that had never been tried before and who would get the blame if it went wrong and people were injured or killed?

Some of his schemes are things of daring, hope and imagination…

Friesland also has some radical ideas about public transport. As is common elsewhere in the Netherlands, Friesland has interlocking networks of rail, express bus, semi-fast and regular services. Common ticketing (including the ‘Strippenkaart’) allows users access to a network where a guarenteed level of facilities are available at different levels of interchanges. In contrast to some ‘get people out of their cars’ initiatives in the UK, vehicle interiors and interchanges can be relatively utiliatrian and the promotion of the network is limited. 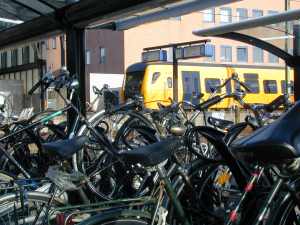 have in the UK where it is a service primarily run for profit, overlaid with an unstable and contadictory morass of public policies and initiatives that try and ensure some degree of acceptable provision. It’s hard to imagine in the Uk the relatively substantial interchanges that Friesland has in remote rural locations where buses arrive simultaneously to connect before fanning out again across the rural hinterland.

The additional innovation in parts of Friesland was to combine existing budgets for public transport, heathcare transport and social services transport to fund a door-to-door demand responsive service open to everyone. This operates on the same zonal fare system as conventional public transport – but at a higher fare.

Why Whitehall doesn’t look here for inspiration more often I don’t know. After all it’s nearer to London than Scotland, and, we are, after all, part of the European Union.

Overall it was a good week – finding out more about these new ideas whilst treking round this quiet, big sky landscape – made accessible by foot, bike or public transport. With its elegant, dignified Northern European towns and its concentration of Neotlithic Hunebeds to the south to explore.