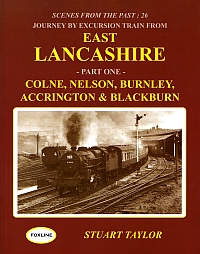 Foxline publishing do a wonderful series of books (five volumes so far) on holiday trains from East Lancashire towns to the Coast (mostly Blackpool) – plus linked titles on Blackburn and Colne. Most railway books suffer from ‘rivet counting’ syndrome – but these books by Stuart Taylor immerse you in the life of those towns in the sixties, the characters and culture of the railway and the popular attractions that await you when you finally get to Blackpool. The excitement as whole towns decamped to the coast during the holiday weeks and the massive scale of the railway operation that got them there. So resonant and absorbing you feel like like you are there.

But all that’s solid melts into the air.

On the morning of 10th June 1962, fifty special holiday trains ran into Blackpool. By 1964 Blackpool Central was closed…to make way for a car park. In 1962 Colne had through trains to London, a carriage depot, goods yard – the lot. By 1971 it was an unstaffed halt on a single track stub stopping service.

The rise of the car – and the shafting of the railways by Marples via his ICI hatchet man, Dr Beeching, with his pseudo science and fixed figures – decimated the railways in less than a decade.

One thought on “Colne – holiday trains to Blackpool in the 1960s”