Bradford once had its own car industry…not only that but its products were Class winners at Le Mans and featured in Raymond Chandler. And only in Yorkshire would vehicles be be named a Curlew or a Weasel (pictured below outside Bradford Town Hall)! 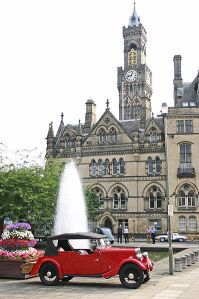 The company was established in 1902 in Bradford before moving to the Springfield Works in Bradford Road, Idle. They broke out of their local markets in the 1920s but it wasn’t until the 1950s that they really went for it with the streamlined Jowett Javelin and the sporty Jowett Jupiter. But their ambitions outran their engineering, production and distribution capabilities and in 1954 the dream of a Yorkshire car industry and marque came to an end.

1950s Jowett styling is something else. Airstreamed but stolid. Like a plane that’s too bottom heavy to ever take off (though the craftsmanship and innovation under the bonnet meant that it surely did). Like a bank manager looking over his glasses…at his mistress. Definitely Northern – with chips, mushy peas and scraps.

So it was only right and proper that there were Javelins and Jupiters at a vintage car event that was occupying a local park the other day.

And according to one website Raymond Chandler’s Philip Marlowe was partial to the Jupiter experience. In the Long Goodbye, Marlowe commented:

‘We went to Victor’s. He drove me in a rust colored Jupiter-Jowett with a flimsy canvas rain top under which there was only just room for the two of us. It had pale leather upholstery and what looked like silver fittings. I’m not too fussy about cars, but the damn thing did make my mouth water a little. He said it would do sixty-five in second. It had a squatty little gear shift that barely came up to his knees.’

3 thoughts on “I want to go Jowetting…!”